The Birth to Five Window – Why Early is Better 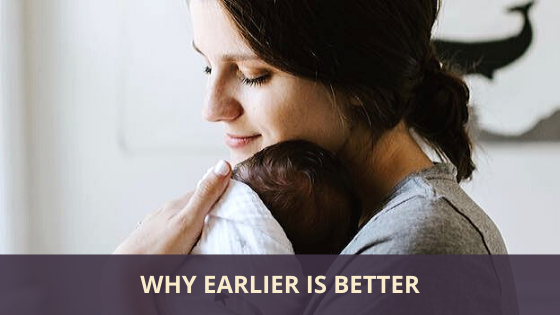 Speaking two languages is a cool skill, but does it really matter when your kids start learning?

The answer is yes and here is why:

The ideal time to learn language is during the Birth to Five window.

Once upon a time, “experts” thought speaking two languages to a child was a detriment to their development. We now know this is not true. In fact, we have piles of brain research that confirms that the ideal time to learn language is during the Birth to Five window.

An infant and young child’s brain is a unique and un-recreatable thing. It is capable of things that an older brain is not. While the cut off date is debatable, what research agrees on is that for language learning, earlier is better.

Language acquisition begins in the womb!

Researchers have found that an infant can distinguish between her mother’s language and a different language at birth.

You see, there are about 800 sounds in all the world’s languages combined, and an infants’ brain can hear and distinguish between them all! However, each individual language only has about 40 unique sounds.

The baby brain can distinguish between 800 sounds!

(until their first birthday...)

It’s not efficient for any brain to process 800 sounds indefinitely, and so by running the numbers on all the sounds they hear, babies quickly learn which sounds are part of their native language and which are not.

By the time a monolingual baby turns one, he loses the ability to hear many of the sounds outside of his “native 40”, whereas bilingual babies remain “open” to a greater variety of sounds.

That may seem like bad news, but check this out!

​It only takes 25 minutes a week to maintain a baby's "openness" to other sounds!

That is great news for parents like me. It gives me hope that each and every minute I choose to speak to my littles in their second language is WORTH IT!

Think about it...between birth and five-years-old is when we learned our first language fluently, fast, and effortlessly.

So why not add a second language during this sensitive period for language learning?

​​What about you? How old are your kids, and when did you start teaching them a second language?

Let us know in the comments below!

​Ready to spend your time falling in love with Spanish instead of tracking down resources? Enter your email below to get a one-week free trial of our Winter Spanish Morning Time Plan.