Why I Almost Quit Before I Started. 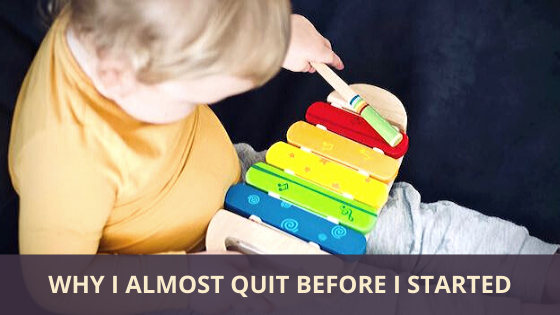 My years of studying Spanish, traveling, and living abroad did not prepare me for the one thing I needed now: baby talk.

​Spanish felt awkward with my baby.

The reality of raising a bilingual child hit me almost as soon as I was holding my squirming first born in my arms. I am not a native-Spanish speaker, and I am the only Spanish ​speaker in our home. It was going to be harder than I thought.

​You see, my mother tongue is English. My heart language is English. I tried to speak Spanish to my baby from day one, but it just didn’t come out. It didn’t sound natural or real or warm.

​My years of language study had left me unprepared to parent bilingually.

​I stumbled along with Spanish for more than a year. Speaking here and there, throwing a word or two around. Mostly words my mom and grandma had used with me. Moco, booger. Ven, come here.

I knew these early years were key for building a foundation in two languages, and I also knew he wasn’t getting the Spanish language exposure he needed from me to be bilingual.

The rubber hit the road right before my son’s second birthday. The trigger? His English.

Before he was talking, I felt like I had time to get my act together and start really speaking Spanish. But from about 18-24 months, a toddler’s vocabulary is growing exponentially. ​

​​When my son started pumping out a handful of new English words each week, I had to make a decision.

Make this dream happen or throw in the towel?

I decided I wasn’t going down without a fight, and I also knew that I wasn’t going to make it without community. So I began my search for like-minded people.

At the time we were living in a large city and I found plenty of Spanish Immersion pre-schools, but not in our price range.

In the end, I resigned myself that this was going to be a lonely endeavor, and I’d just have to do my best.

​​Maybe fully bilingual wasn’t ​going to happen. I’d have to adjust my expectations and goals.

Then it happened. What I can only describe as a miracle.

I took my son to the library for Story Time. While sitting around a circle singing and listening to stories, I hear a white mom with an American accent speaking only Spanish to her white daughter. SHE WAS DOING IT! She had figured out this ​puzzle I'd been trying to solve.

I introduced myself and asked her a million questions! She told me about a parent-led Spanish Immersion Pre-School Coop she was part of and invited me to join.

​​I had found my community!

Next up: The Power of Community - Finding My People

​What about you? How did you find your language community?

​Let me know in the comments.

Looking for an easy way to add more Spanish to your homeschool? Get a free week trial of our Fall Spanish Morning Time Plan to see if it's right for you!

Spanish Curricula for Our 2020 School Year
How We Start Our Homeschool Year – The Spanish Immersion Soft Start
Why I Almost Quit Before I Started.
The Time I Failed Bilingual Kindergarten
How To Use Montessori Three-Part Cards